Mike Itkis, a third-party liberal candidate in New York’s 12th District and current major in the US Army Reserve, is running to unseat Jerry Nadler in November, having achieved ballot access in September.

The 53-year-old Itkis – whose bio describes himself as ‘Not married. No kids. Not celibate. Atheist.’ – stars with adult actress Nicole Sage in the X-rated clip, which features the pair having sex on camera twice over the course of the past year.

The video, which is about 13 minutes long opens with the performer Sage, clarifying that she consents to the scene and is ‘not under the influence of drugs or alcohol.’ 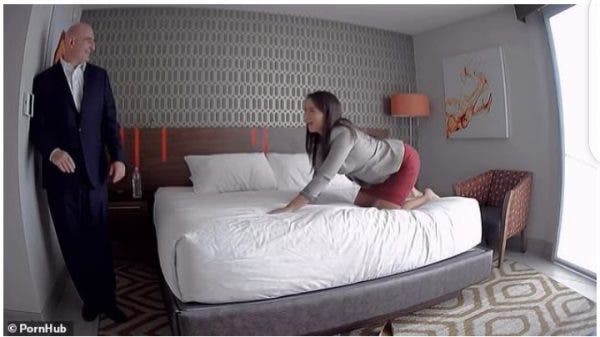 Itkis told City & State that he made the video in an attempt to walk the walk, a ‘conversation piece’ backing up his campaign promises regarding sex work.

He said: ‘If I would just talk about it, it wouldn’t demonstrate my commitment to the issue. And the fact I actually did it was a huge learning experience, and it actually influenced items on my platform.’

The progressive independent’s key issues include legalizing sex work, ending the war in Ukraine (Itkis was born in Odessa before moving to New York City in 1979) and keeping men from being forced to pay child support without ‘prior agreement.’

The video, titled ‘Bucket List Bonanza’, was his first time the Cornell graduate has ever performed on film.

Itkis said: ‘I’m very much an introvert. I’m kind of a nerd who doesn’t like to be the center of attention if I can avoid it. But I thought the issues I’m trying to address are so important… I wanted to have my issues talked about in some way.’

The registered Democrat is running as an independent because he says that despite having ‘uncompromising opposition’ to the Republican agenda, ‘he has significant disagreements with establishment Democrats and wanted to provide the voters a choice on November 8.’

Despite the lurid nature of the video, his Republican opponent isn’t knocking it.

Mike Zubluskas said: ‘You gotta do what you gotta do. The media ignores everybody that’s not a Democrat in the city.’

Itkis isn’t even the first Manhattan politician to attempt to drum up attention using a sex tape.