A man has taken to Twitter to disclose that he is still married to his wife and loves her despite being unfaithful to him twice.

The Twitter user shared his experience after a fellow user questioned the ability of men to pray for their cheating wives, just like the women do for their husbands.

“Christian women have been sentenced to WAR ROOM for years to pray for cheating men but the moment a Christian man catches his wife cheating. he divorces her. Can’t he pray too? Can’t he bind the demons that want to destroy his home? Or has God stopped hating divorce?”

The user responded by saying cheating is not a big deal. He further noted that he is still very much in love with his wife, who has cheated on him twice.

“There’s no big deal …I’m currently still married to my wife who cheated on me twice.. he question is ‘do i still love her? Do answer is ‘yes” 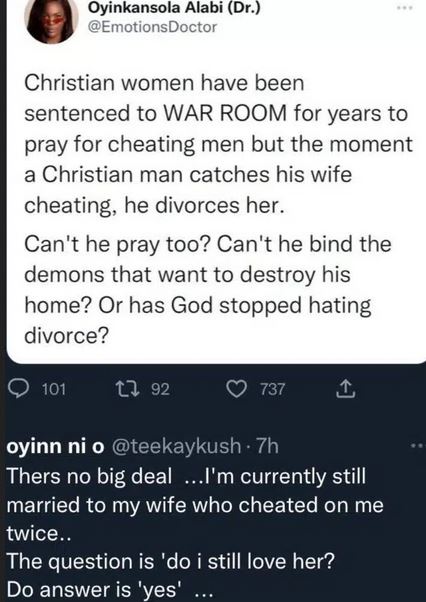