A husband and wife, both 100 years old and married for nearly eight decades, have died hours apart.

Hubert and June Malicote met at the Church of God in Hamilton, Ohio, in 1941, and tied the knot two years later. 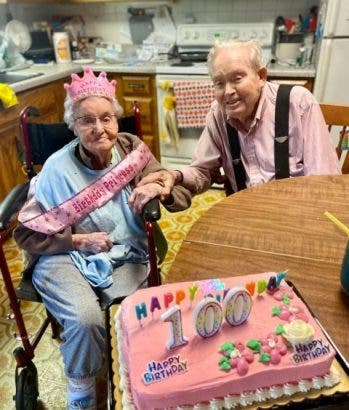 The husband and wife died 20 hours apart on November 30 and December 1, respectively, at Hospice of Hamilton.

‘Hubert preceded June in death by only hours, marking the end of their 81-year love story,’ his obituary reads.

The Malicotes celebrated Thanksgiving the day before the holiday by hosting a pizza party for their entire family. Their son, Sam Malicote, 76, told the Dayton Daily News that ‘everything was fine’.

But that night, June became ill and her daughter, Jo Malicote, 70, took her to hospice care. Hubert visited his wife on the Friday after Thanksgiving and ‘broke down’, according to Sam.

Hubert was admitted to hospice as well, in the same room as June, and both became unconscious. Their hands were put together.

Neither one of them regained consciousness. Hubert died at 9.15pm and June followed at 5.40pm. Hubert died of a ‘broken heart’, Sam said.

‘They went out together,’ the couple’s son said.