A 10-year-old boy has been hailed after he decided to sell all his toys in order to afford a Christmas gift for his mother.

It was gathered that the British boy put all his toys up for sale to achieve his aim of making his mother happy this festive period. 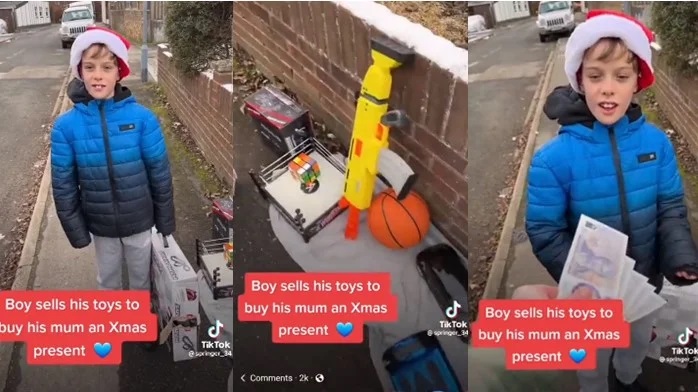 A video making the rounds on social media shows when a Good Samaritan who described the boy as a legend, decided to pay for everything.

The young man commended the kid for doing something ‘absolutely amazing’ and gave him 200 pounds as a way of supporting his fundraiser.

He first bought the toys for 100 Pounds so that he could fulfil his wish, after which the TikToker handed him another 100 Pounds to get something for himself.

The boy initially refused to collect the second money, but the man insisted and proceeded to ask him to put the toys in his car.

He put his toys on sale so he could buy Christmas gifts for his mum 🥺🥺🥺🥺 pic.twitter.com/KNctfN6u9Y