A social media user has stated that polygamy is good in reaction to a Kenyan man, Hez Jakamollo who posted photos of the identical houses he is building for his two wives in their village.

The Strathmore University Nairobi graduate took to Facebook on Tuesday, December 29, to share photos of the two houses which are nearing completion.

“Work in progrees…slowly taking shape.” he captioned the photos.

The post has been awash with congratulatory comments from his friends, followers and other Kenyans.

When one Bernard Mua asked why he is building two homes in same compound, Jakomollo replied “Proudly polygamous. In congruence with my ancestors.”

In his congratulatory post, Jesca Kiplagat said polygamy is good if the wives are treated fairly and equally.

“Polygamy is good when you can treat them fair and equal.. Kwa wale bado mnaficha ndio muonekane wazuri zaidi, you can do better…. congratulations to my friend. You should be the main speaker in the upcoming Men’s Conference.” he wrote.

“Hez Jakomollo has set the bar high.I’ve realised that there’s nothing wrong if a man want polygamy. But you have to ensure that you have credibility to treat the wives fair.. Congratulations wuod Karachuonyo” 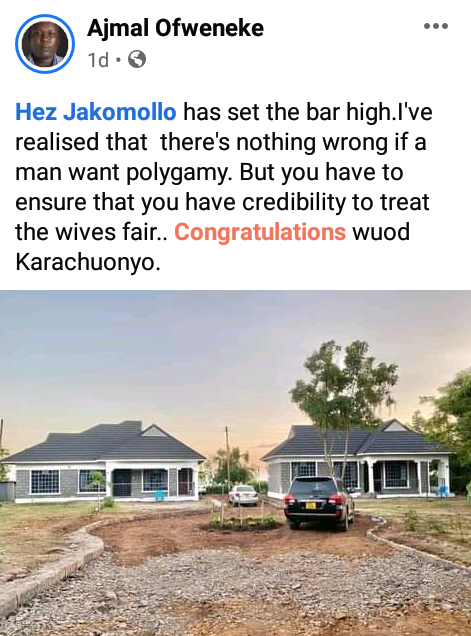 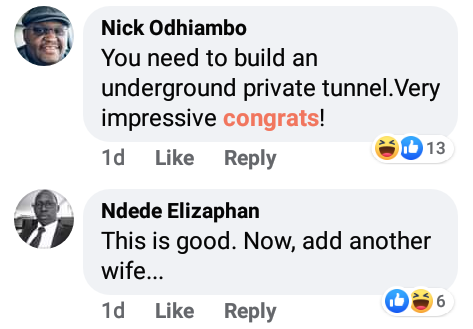